After playing with Solaris 10 for a few months I decided to try one of the linux-SPARC64 ports on my little ultra5. 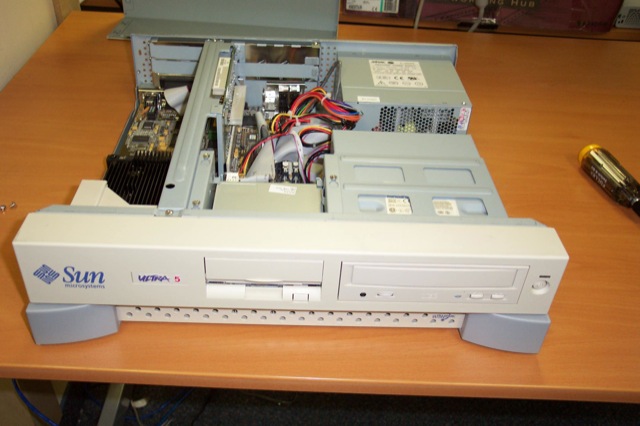 It’s a decent little box with an Ultra Sparc IIi @ 400Mhz and 512mb ram but one thing it lacks that I wish it had was SCSI. Sun used IDE in the Ultra5/10 to make it’s price point as low as possible. Unfortunately their choice of IDE controller chips wasn’t the greatest and the disk I/O performance on the ultra5 is terrible. Perhaps that was a strategic move on Sun’s part to ensure the Ultra 5/10 didn’t undercut sales of it’s much more expensive workstations and servers. And of course, Sun being Sun you can’t just use any old PCI SCSI card, you need one with Sun boot code support which immediately makes the price 2-3x the going rate for a decent SCSI card. Anyway, all that aside it’s a cheap little machine to learn the quirks of Sparc64 on.

Solaris is nice to know but truly a pain in the butt to work with compared to Linux if you want to build GPL software. I tried FreeBSD sparc64 but found the port a little unstable. I don’t know if it’s the age of the platform or the fact that anyone that wants to run Sun hardware is likely to be running Solaris but most distro’s that used to support Sparc have either gone away or stopped releasing sparc builds. Thankfully debian still has a well maintained sparc port that seems to be running fine on my little Ultra5.

There are a few quirks like the local console (keyboard/mouse) doesn’t appear to work, the console on serialA works fine though. I’m currently using my Ultra5 for backups with rsync, a music server running gnump3d and a secondary DNS caching box for my network. Soon it will be running a Hylafax fax server and Nagios monitoring. If I can find a Sun SCSI card cheap enough on ebay I will be running my DAT tape drive on it as well. Not bad for a machine that cost $100 used two years ago.

Update Nov 2007: This little machine made the trip across the country with me and is currently my webserver. If you’re reading this you’ve used CPU cycles on my ultra5! 🙂

Badlands at minus thirty.

Some film scanning backlog from 2020.

Ferrania P30 continues to mystify me.

I'm going for likes now so here's a caboose shot.

Somewhere between here and there.

When I wasn't paying attention they added the abil