Spent two hours at the DC Friday night trying to install some new blades in our bladecenter. Every time I installed a new blade the power light kept flashing rapidly. I logged into the web management for the bladecenter and saw the event log entry “Can not read power-on VPD for blade”. Because the bladecenter would not read the hardware VPD from the blade it would not allow it to power on.

After speaking with IBM support we decided to update the firmware of the AMM (advanced management module) in the bladecenter. When I tried to update the firmware it gave me an error saying that it could not install the update. After 45 mins of trial and error with the IBM engineer (great support BTW, 1000 times better than dell!) we decided to reboot the AMM. (this had no affect on the running blades btw).

After a reboot everything worked fine! I was able to install the 6 new blades and update the AMM firmware to the latest release. It was strange because all the other functions of the AMM seemed to be working fine, the already installed blades were communicating with the AMM without issue. I would suggest that anyone who runs into this issue should try to reboot the AMM first, as it’s a fairly low impact thing to do and it would have saved me an hour if I had thought to do it from the start. 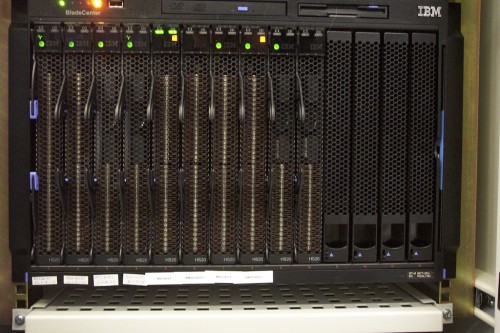